1. Can I get something custom designed?

Of Course! Kyllonen does custom designs which are 100% Unique per your request.

We do not; however, copy other designs or accept designs to replicate. You can send us design ideas or any inspiration you would like to create your custom design. There will be a design/mold fee which varies in complexity, ranging from $120 - $350, which will be included in the price and in a detailed breakdown.

Custom designs take time as we will let you approve any final decisions, plus there is manufacturing time.

*Kyllonen has the right to use a custom design for future sales purposes. If Kyllonen chooses to do so, you will be notified and we will refund you your design fee!

2. How do I get my jewelry repaired?

First, please send us an email at info@kyllonenluxury.com

Our team will contact you and arrange shipping and any fees involved.

3. How often do you get new inventory?

However, we occasionally make inventory purchase more frequently to meet demand and Freshwater Pearls and Diamonds are purchase throughout the year, usually monthly. If you have any specific requests, or looking for something unique, contact us atinfo@kyllonenluxury.com and we will be happy to help you!

4. Do you offer discounts?

Yes! If you sign-up for our newsletter you will receive a 15% discount on your first purchase.

5. How long will it take to receive my order?

Generally, shipping will take 3-4 weeks. This is due to the production process and selection of pearls due to Kyllonen’s high-quality standards. However, some items are ship much sooner and can be received in as little as 1 week.

6. How can I check my order status?

We will provide you will tracking information which you can check on your status at any time!

7. Do you offer returns?

8. Why did my order ship from Hong Kong?

Kyllonen is an international company with warehousing and manufacturing centers across the world. Occasionally we do not have inventory in our North American Office and may ship from our Asia Office.

9. Do you offer rushed shipping?

Currently, we do not offer any form of rushed shipping. However, if you have an item that you would like to purchase and is time sensitive, contact our sales team atinfo@kyllonenluxury.com. We will give you honest predictions on the availability and timetable required to receive your purchased items.

10. what determines the value of a pearl?

There are about 7 factors that go into a pearls value. You can click here to see the full article: 7 Pearl Value Factors

However, how long pearls last is mostly up to you! Pearls are sensitive because they are porous (they came from something living). Things such as perfumes, sweating, and smoking all have adverse effects on pearls. If you properly maintain your pearls, they should last long enough to pass down. We created special instructions to care for your pearls, which you can find here: Pearl Care

12. How are Pearls Graded? Is there a Standard Pearl grading system?

Currently, there is no standard internationally accepted pearl grading system.

Places such as Tahitian Government have developed their own system using A-D to mark quality; however, that only applies to black pearls deriving from Tahiti. Kyllonen does not use this system as the standards are lower than our grading expectations.

The most common grading system is a AAA-A system; however, because it is subjective, many companies have added grades such as AAAA, even 6A. The quality levels also differs from company to company.

Because of the uncertainty in pearl grading, we developed our own system for grading which derives from the AAA system but also includes luster and saturation, which most systems do not give as much weight to. The Kyllonen system is as follows: Gem, Near Gem, AAA, AA+. Gems are rare pearls exceptional saturation and luster. Near Gem only differs from Gem by flaw.

13. What is Kyllonen’s Diamond Grading System and how is it different from GIA?

Kyllonen only buys GIA or AGS graded diamonds, which we will include the certification with your purchase. All Kyllonen diamonds are Triple EX (3EX, Excellent, Excellent, Excellent) or Triple 0. This is the highest grading available on the market for these grading institutes.

Kyllonen believes the current grading institutes have low standards and aims to truly separate the ideal cut diamonds from the good cut diamonds. Kyllonen has developed a unique proprietary system for grading diamonds. The system will take the top cut diamonds, and further break them into categories, giving you the best possible diamonds, which will outshine the competition.

No. At Kyllonen, we only offer 18k Gold or 950 Platinum. We do this because 18k is the international standard for minimum gold content. 14k Gold (58% gold) is acceptable by some countries standards such as the United States; however, no international company will carry this quality as it is not accepted everywhere.

Kyllonen is a luxury company because we only carry the highest quality materials, sourced from all over the world. Kyllonen has built itself quality and design. Kyllonen does not source jewelry from mass produced manufacturers which are low quality. Kyllonen has a design team that designs and manufactures every piece of jewelry.

Things we will NEVER carry:

Nacre is the layers that are secreted from the oyster that forms around the foreign object inside to form the pearl.

Cultured Sea Pearls have mantle tissue and a nucleus from a donor mollusk inserted inside the oyster to begin the process of the oyster forming the pearl. The thicker the layers of nacre, the greater the luster and the longer you can expect the beauty of the pearl to last. Low quality pearls have thin layers of nacre which affect to the beauty and longevity of the pearl.Freshwater pearls on the other hand, do not contain nucleus (except for Edison Pearls). As you can see from the photo above, freshwater pearls have no nucleus.

Certain governing bodies have rules in place on nacre thickness, Black pearls exported from Tahiti must have nacre greater than 0.8mm but are typically over 1mm. Certified Akoya Pearls such as Hanadama and Tennyo must have a minimum of 0.4mm nacre thickness and are typically .5mm. Kyllonen only carries the highest quality pearls. With care, your pearls will last generations. 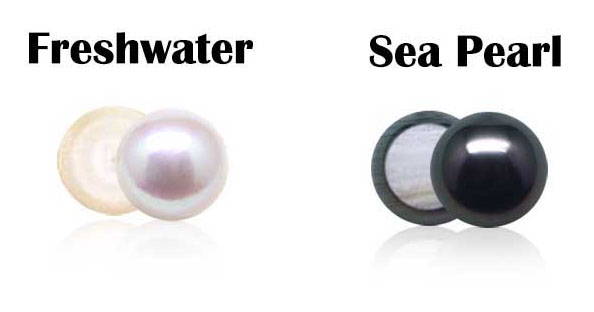 17. How can I tell the difference between real and fake pearls?

Fake pearls cannot imitate the natural beauty of real pearls. Real pearls have a special quality which we call “orient.” This is the inner colors and is unique to pearls. Below is a photo comparing the difference between fake and real pearls. 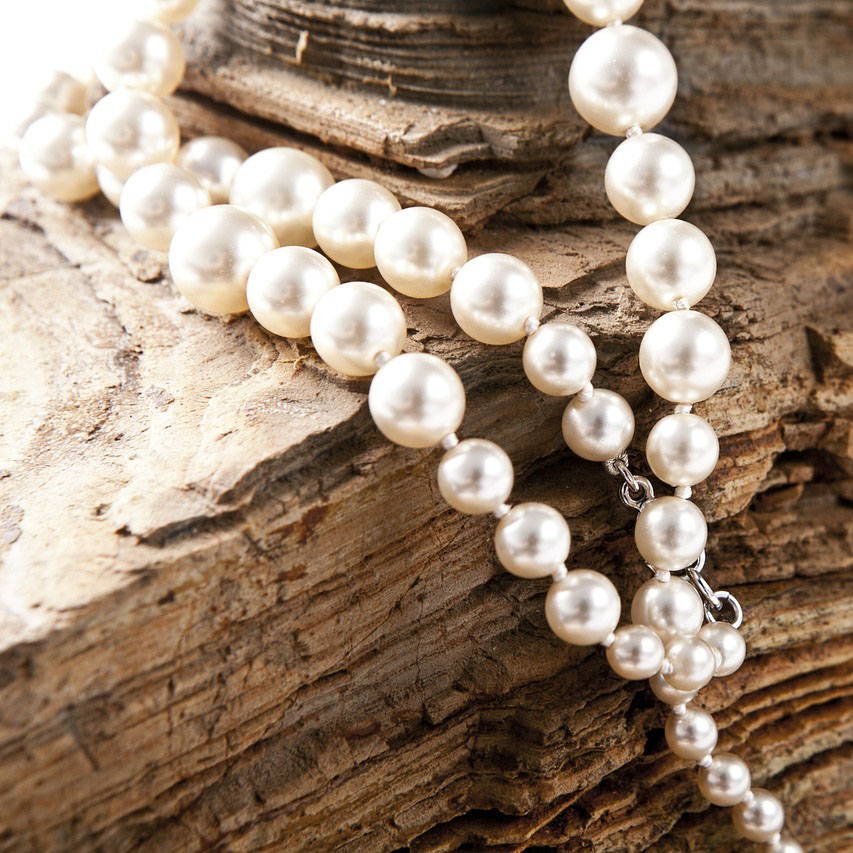 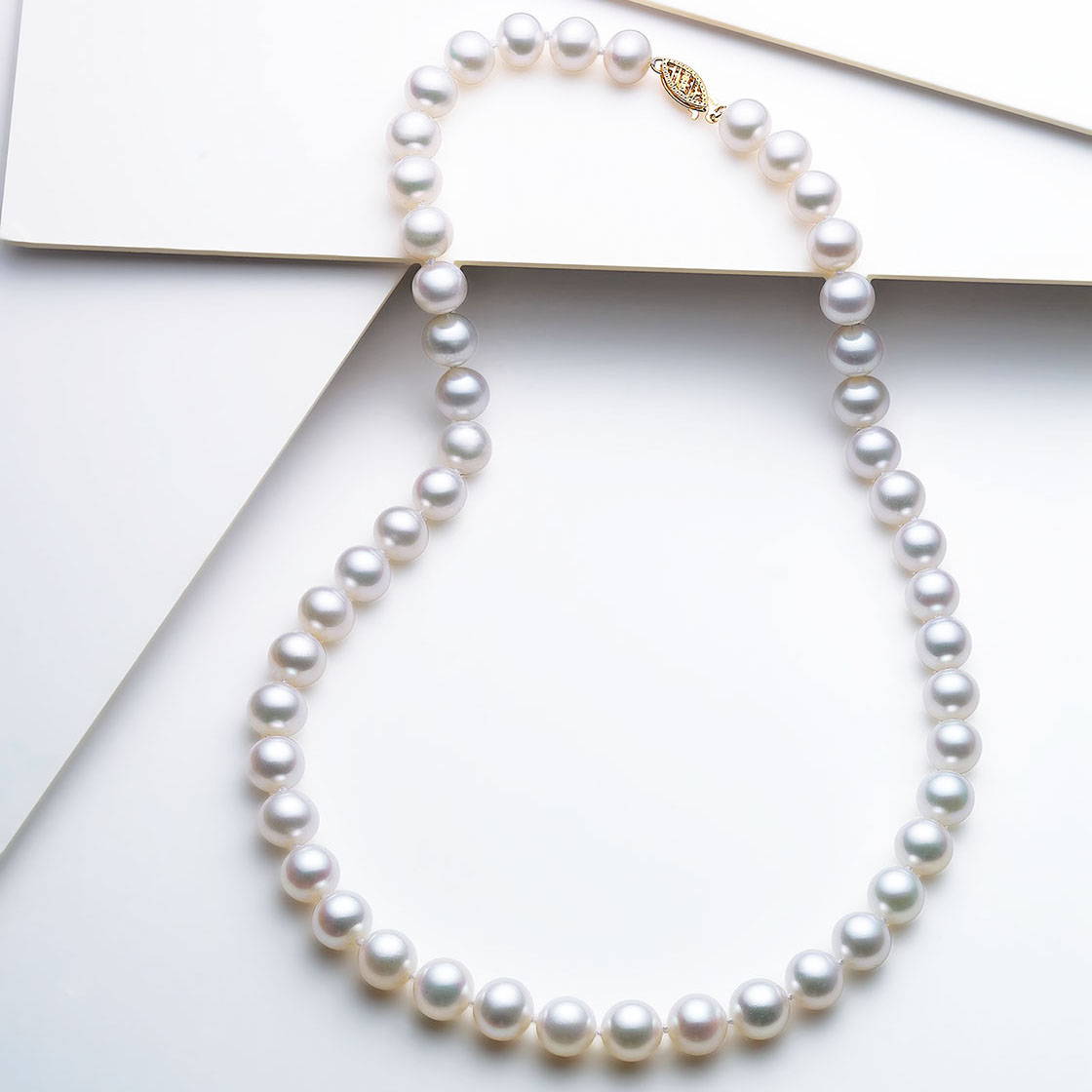 You can see from the first photo that it has a uniform color with no orient or inner color with a slight silver body. This is how you can tell they are fake just by visual or photograph. The second photo you can see some slight color variation in the orient.

Some lower quality pearls will be harder to distinguish from their fake counterparts such as Majorca pearls. Luckily, at Kyllonen, we only carry high-quality pearls, and the difference is obvious.

Additionally, there are some ways to tell if pearls are real if you have them in hand.

Cleaning pearls should be down with gentle soap, NOT dish soap or detergent. You should use a non-abrasive cloth, such as the one provided by us, to prevent scratching the pearls.

For more in-depth information about how to care for your pearls, you can go here: Pearl Care

Pearls can range greatly depending on the quality and type for pearl. As with most things, the rule of scarcity is a major factor. Common low-quality pearls have no value in its pearl form, so they are crushed down to form pearl powders or other non-jewelry related products.

High-quality rare items such as pearls of exceptional size and beauty can go up to $100,000. Cultured pearls are generally priced well compared to wild-natural pearls because they are less rare. A perfectly round high luster pearl, which is wild-natural, will sell at extremely high prices regardless of flaw. These pearls are often sold by weight such as carats, rather than by millimeters.

We allow you to sort our products by price so you can shop accordingly.

20. Why are Akoya pearls more expensive than freshwater?

Akoya pearls and Freshwater pearls are very similar, but not equal. Akoya pearls have several factors that set them apart such as luster and shape.Akoya’s are almost perfectly round and have mirror-like luster.

All sea pearls have a higher mortality rate as they must survive in the ocean versus a lake. The ocean has more predators and are susceptible to storms and other natural disasters.

21. What’s the difference between freshwater and sea pearls?

22. What are cultured pearls?

Yes, cultured pearls are natural. Cultured pearls are pearls that grew with the help of human intervention. This means that cultured pearls were not found in the wild and harvested. Instead, the oyster is either captured from the wild or bred. If the oysters are mature enough, they will be grafted (surgically add material such as bead and mantle tissue). After this, it is up to the oyster to produce the pearl, which may or may not happen. The human is essentially adding the irritant in the process in hopes to get a pearl in return.

23. Are the pearl’s color natural?

Kyllonen only sells natural color. We never sell dyed or irradiated pearls. Some pearl sellers sell these type of pearls, and may not disclose this to you.

Treated pearls are most commonly freshwater (to make them look similar to black pearls), Akoya pearls (make white pearls appear blueish silver), and gold pearls (make them darker gold). These treatments often do not last and return to their original color.

These are pearls you will never find at Kyllonen. We only sell 100% genuine pearls without color treatments.

24. Can I order diamonds with No Fluorescence?

Yes. Please contact our sales team and they will assist you in your purchase.info@kyllonenluxury.com. Usually there is a slight charge (5-10%) for no fluorescence diamonds; however, we frequently do free upgrades on diamonds.

25. Where do your diamonds come from?

Our diamonds come from all of the world! They are 100% conflict free. You can check out the map to see where most of the gem quality diamond production comes from. 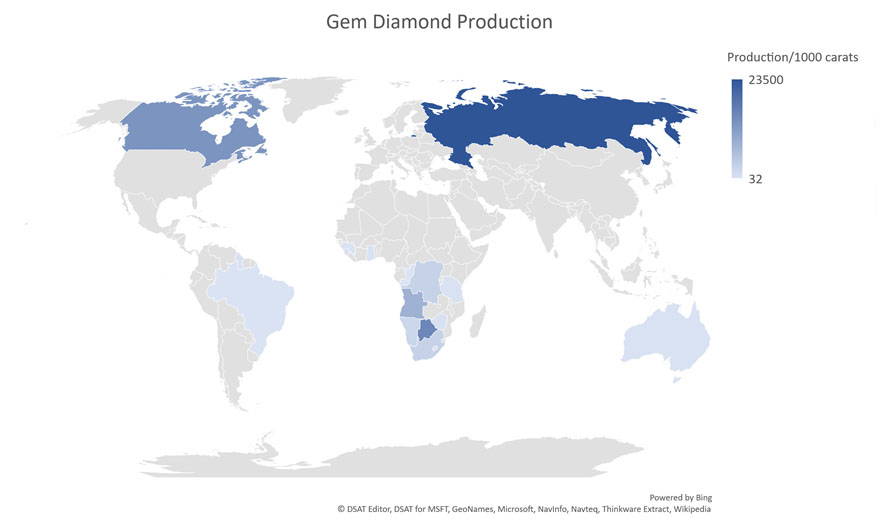 26. Are your Diamonds Conflict free?

The United States requires diamonds imported into the country to adhere to the Kimberley Process through the Clean Diamond Trade Act. If you would like to read more about this, you find it available here: Clean Diamonds Trade Act

27. Can I buy just the diamond setting?

Unfortunately, no. We are extremely proud of both our diamonds and our designs. We will only put our quality name with products that have been selected by our team of experts.